We invite you on a two-day journey in the world of art, and at the same time, we offer you to enjoy some of the cultural and historical facilities of Elena municipality, Bulgaria, and Medgidia, Romania.

Enjoy a mix of forms in art, travel through time, discover the specific nature of the regions.

The old class school, emblematic of the town, has been restored to its authentic image. It was built in 1874. It burned down in 1877, during the Liberation War. Rebuilt in 1880 on the initiative of the vigilant people from Elena and functioned as a school until 1988, when a second fire burned down the building and only the stone foundations remained.

The restoration and transformation of the school into an art gallery begins in 2019 and ends in 2021. Within the project “Culture in Eternity” implemented by the Municipality of Elena, funded by the Cross-Border Cooperation Program “Interreg V-A Romania-Bulgaria” 2014-2020.

Today the new art gallery is a place for organizing exhibitions and cultural events. When you visit it you can see: 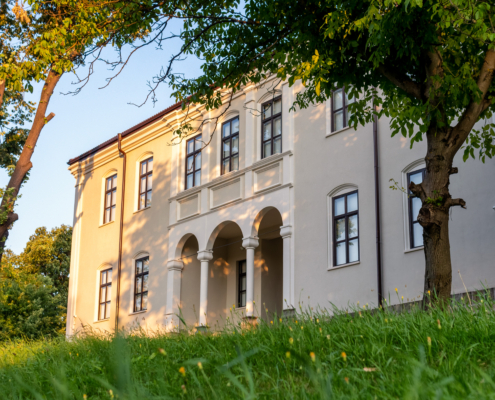 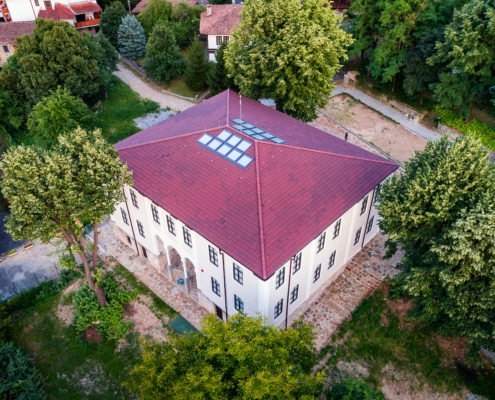 The clock tower is a remarkable and original cultural monument in the town of Elena, which is of national significance. Its place is successfully selected to be seen and heard from every part of the town. The clock tower, the dome of the church: the Dormition of the mother of god, and the belltower are triple vertical dominant, which marks the social-religious center of the town.

It was built in 1812 by an unknown master from Elena. In the prayer book of the priest Hristo Kurshov is mentioned, “…to be known when it was built in 1812, the bell was fixed on Enyov den (midsummer day).” The mechanism and bell which are inside the clock tower were bought from patron faisi aga. The bell was infused in the town of Gabrovo, as evident by the inscription on the bell. The tower was thoroughly re-built in 1857 or 1858 by a famous Elena builder Tsoncho Ustabashi, was stabilized in 1953 and completely restored in 1987.

The tower consists of three parts, which are harmoniously coordinated. The base of the tower is made of stone and is square-shaped, with a height of 12,5 meters with elucidated loop holes. The middle part is an eight-sided prism with plastered walls, painted and whitewashed, covered with copper lament. The mechanism of the clock is inside the prism. The top part is a square with lightweight wood construction and it is open from all sides and angles. Inside hangs the bell. The roof is cone-shaped, trimmed with copper lament, and has a tall point with four lead balls. 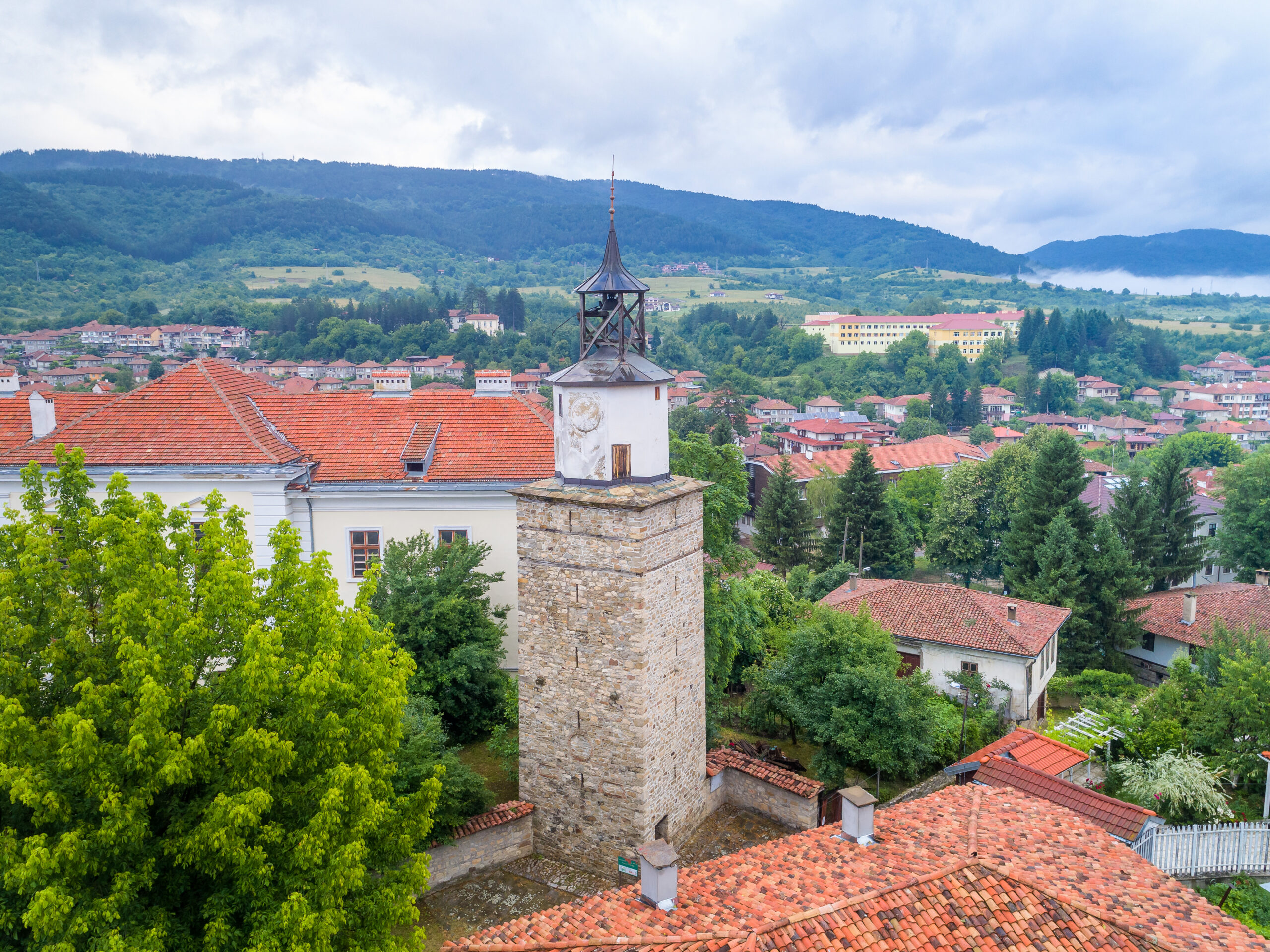 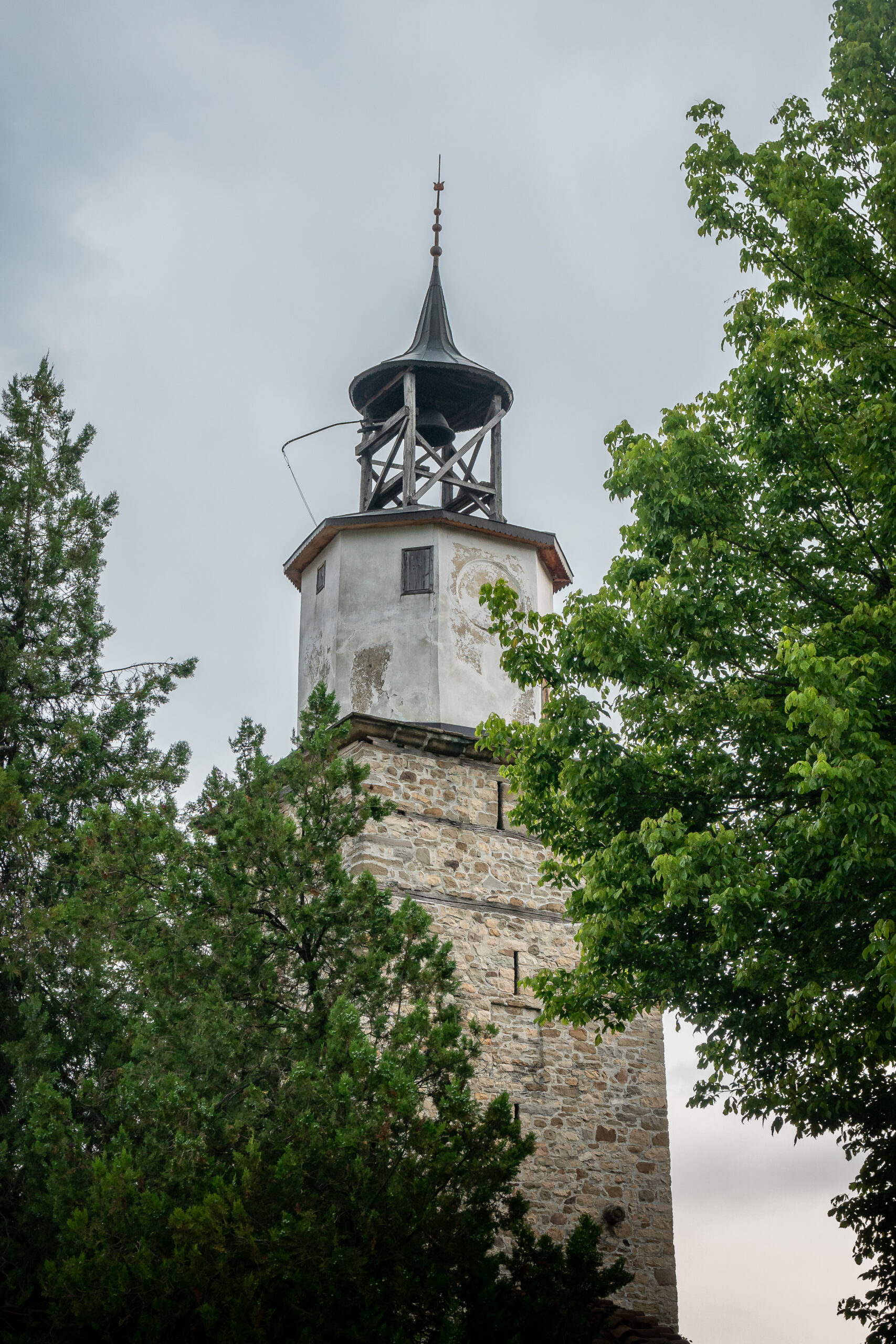 Kamburov’s inn was built in the first half of the 19th century and bears the name of its owner – Stoyan Kambura, who took part in several uprisings and was a member of the revolutionary committee in Elena. The building is an immovable cultural value, categorized as “local significance”.

Since 1981, the inn has been a museum. The permanent ethnographic exhibition focuses on agriculture and animal husbandry as the main livelihood activities of the local people. There are exhibitions of valuable works of the most characteristic traditional crafts for the period of the revival period – homespun tailoring, pottery, boiler making, wine-growing, silkworm breeding. A part of the jewelry collection is shown. There is also an exhibition of traditional folklore costumes, rugs, and belts woven “on bark”. Urban life is also represented. 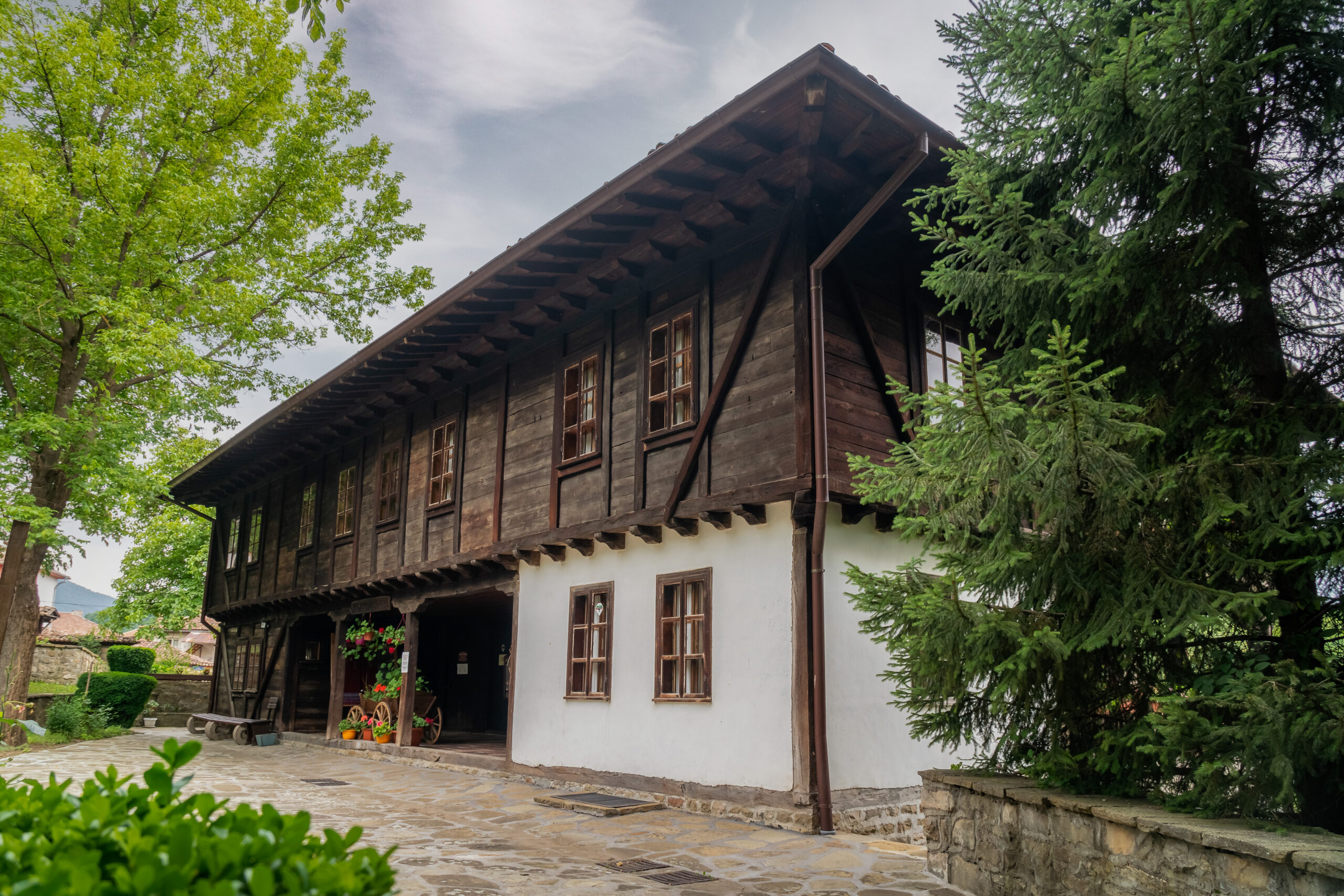 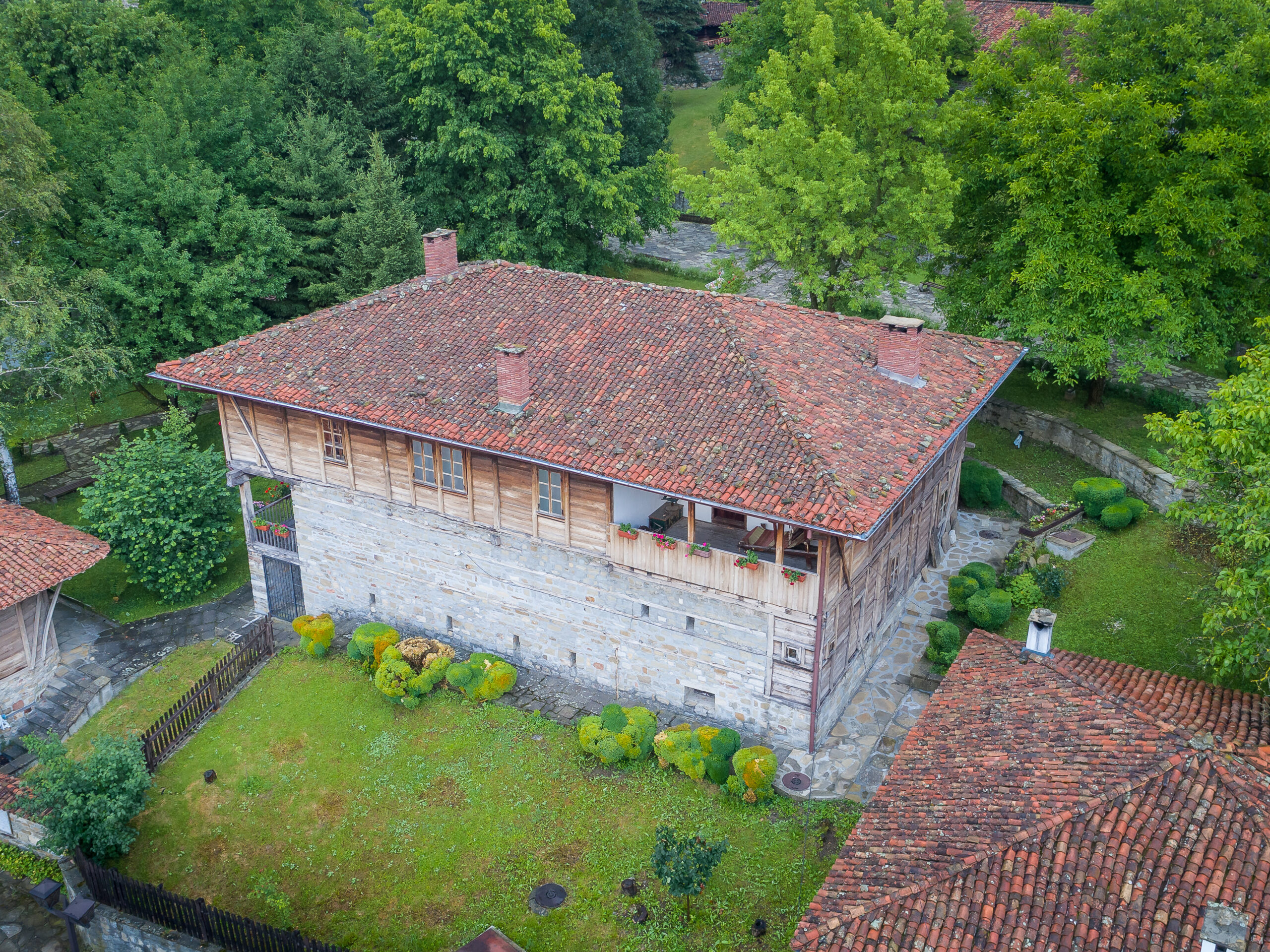 The class school in Elena, known as Daskalolivnitsa was established in 1843 by Ivan Momchilov. It originated and developed based on the century-long literary tradition of the town. It was founded in response to the matured socio-economic and cultural needs for well-trained teachers. Daskalolivnitsa is the first teacher-training school in Bulgaria.  The building of the class school in Elena was built on the initiative of Ivan Momchilov in 1844. Restored in 1968, today it is a museum in the “Daskalolivnitsa”.

1. “Elena during the renaissance”  – presents the history of Elena from the origin of the village to the Russo-Turkish war of liberation 1877-1878.
2. “Christian art from the xix century”  – on the ground floor of Daskalolivnitsata is exhibited icons, church utensils, and murals from the church “Archangel Michael” in the village of Shilkovtsi. 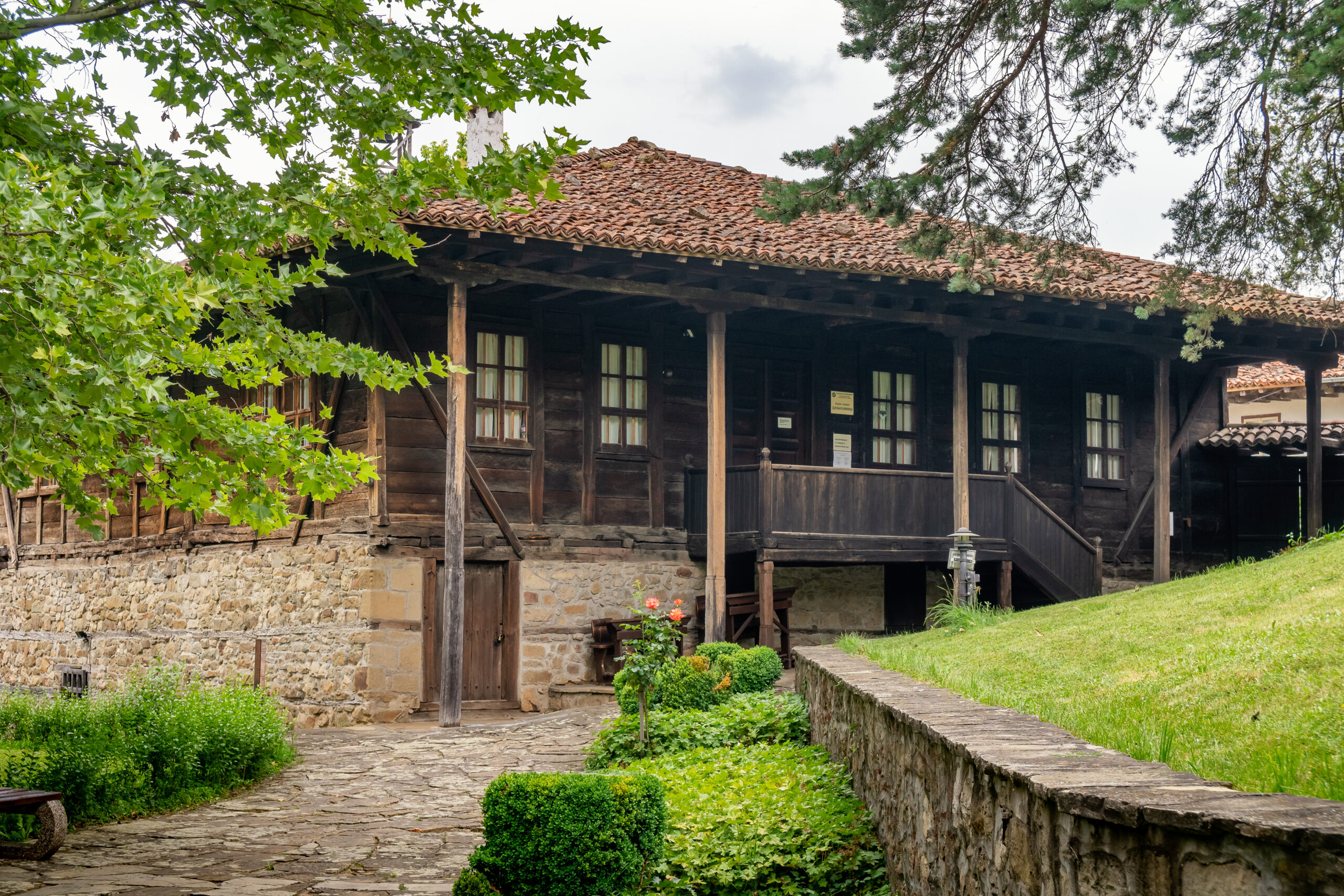 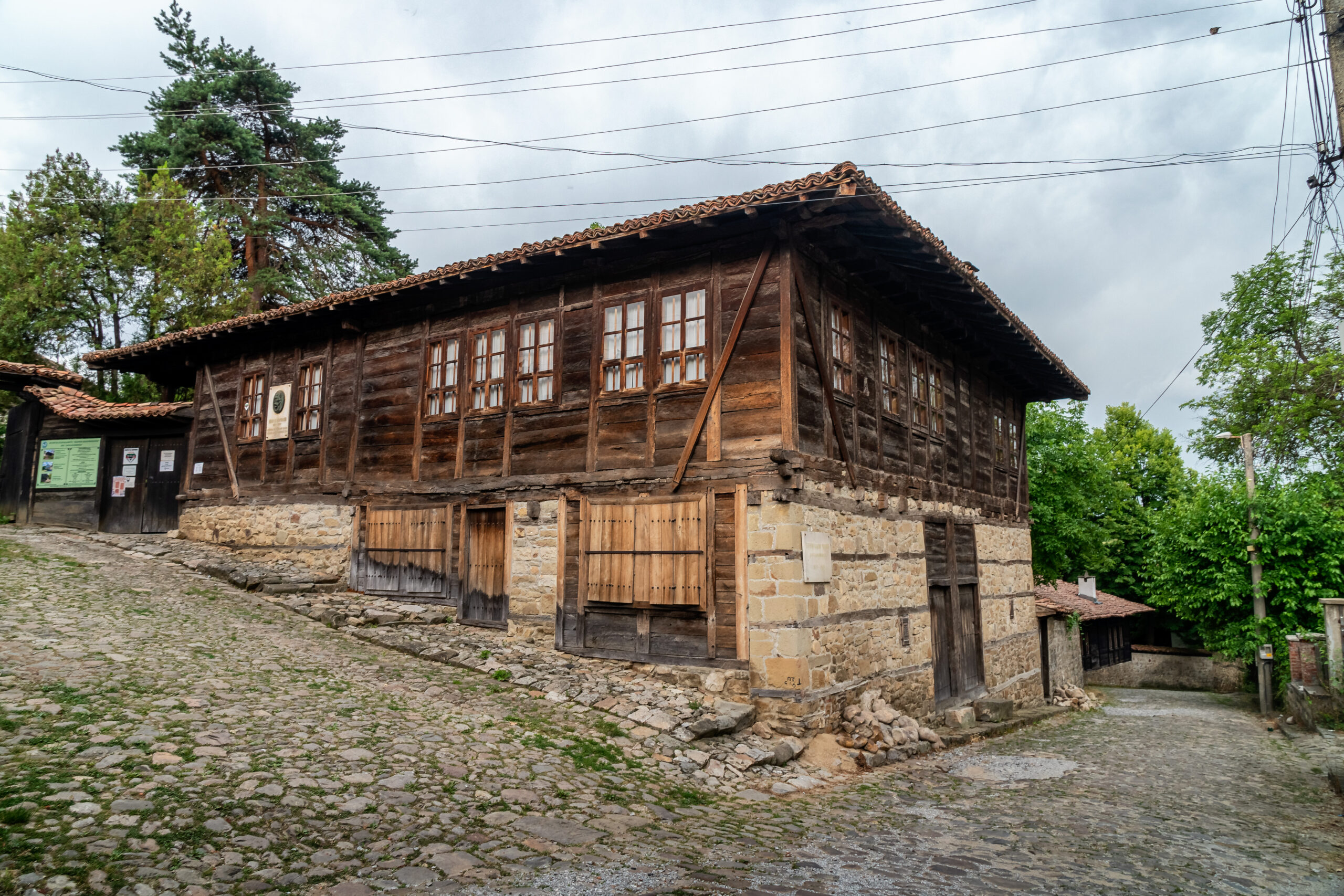 St Nikola church is within the museum complex Daskalolivnitsa. It’s the oldest church in the town.  The visitors can see murals, icons, and wood carvings in it.

On April 23, 1800, St. George’s day, when the town of Elena was attacked by the people from Kardzhali, the church was burnt down. It was renovated in 1804 with the means and labor of the local people. The building itself was built for a short period of 40 days, and there is a saying that this was kept secret from the Turkish authorities. Externally the architecture of the church is humble and unpretentious. The interior is richly decorated, in accordance with the orthodox concepts of the church as a mirror of the human soul.

The murals in the church “St Nikola” are painted by David and Jacob, who came to Elena from Hilendarski monastery as they were invited by the local people. They finished their work in 1817-1818. Yoan Popovich and Yordan Mihov Kmetski also took part as assistants. The church has been declared an immovable cultural value and categorized as “national significance”, and the decoration inside is one of the best achievements in church art from the period of the early revival. Visitors can see the gallery images of saints, including Methodius of Moravia, George Novi Sofiyski, Sava Srabski, and St. Clement of Ohrid. 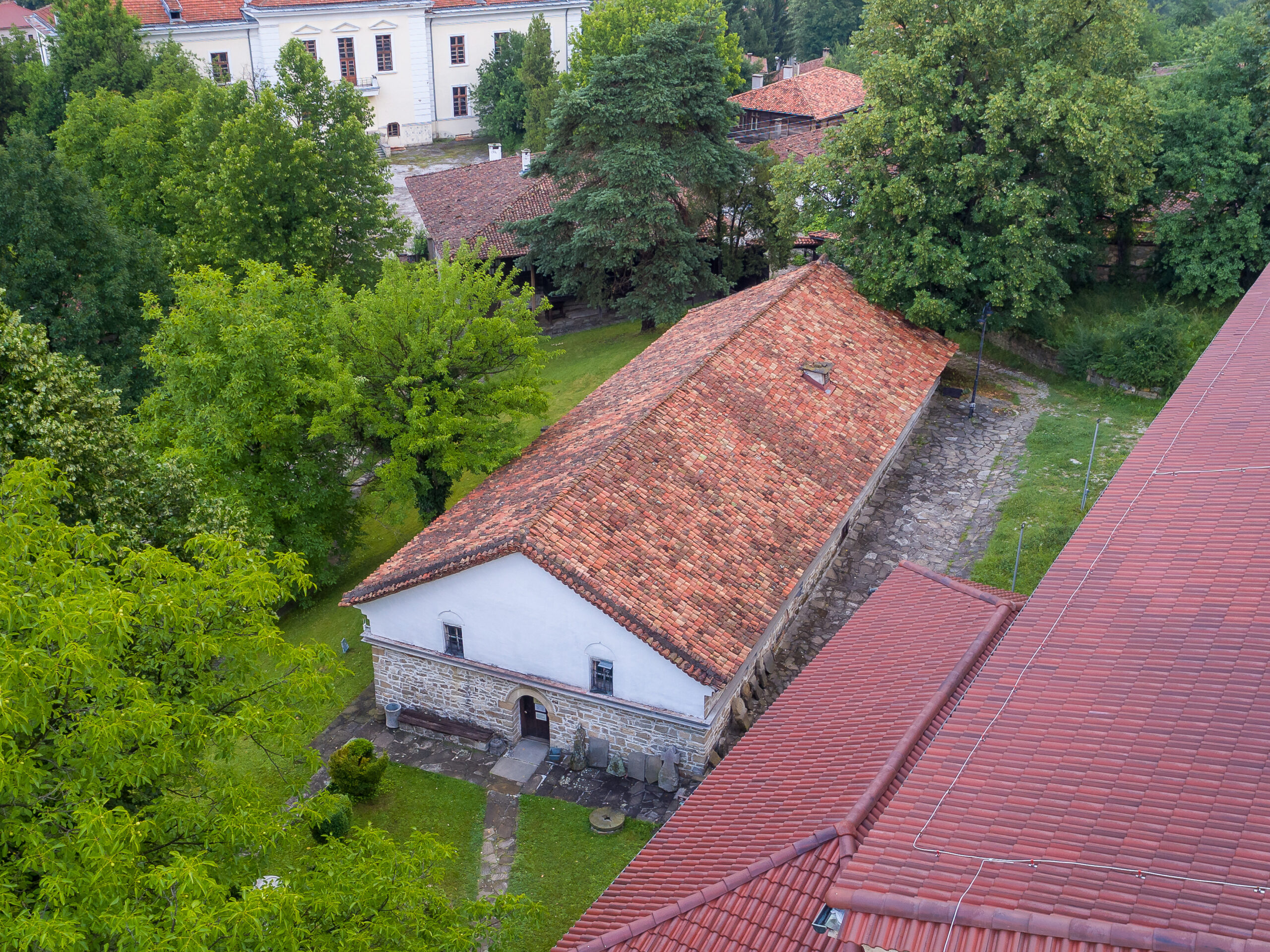 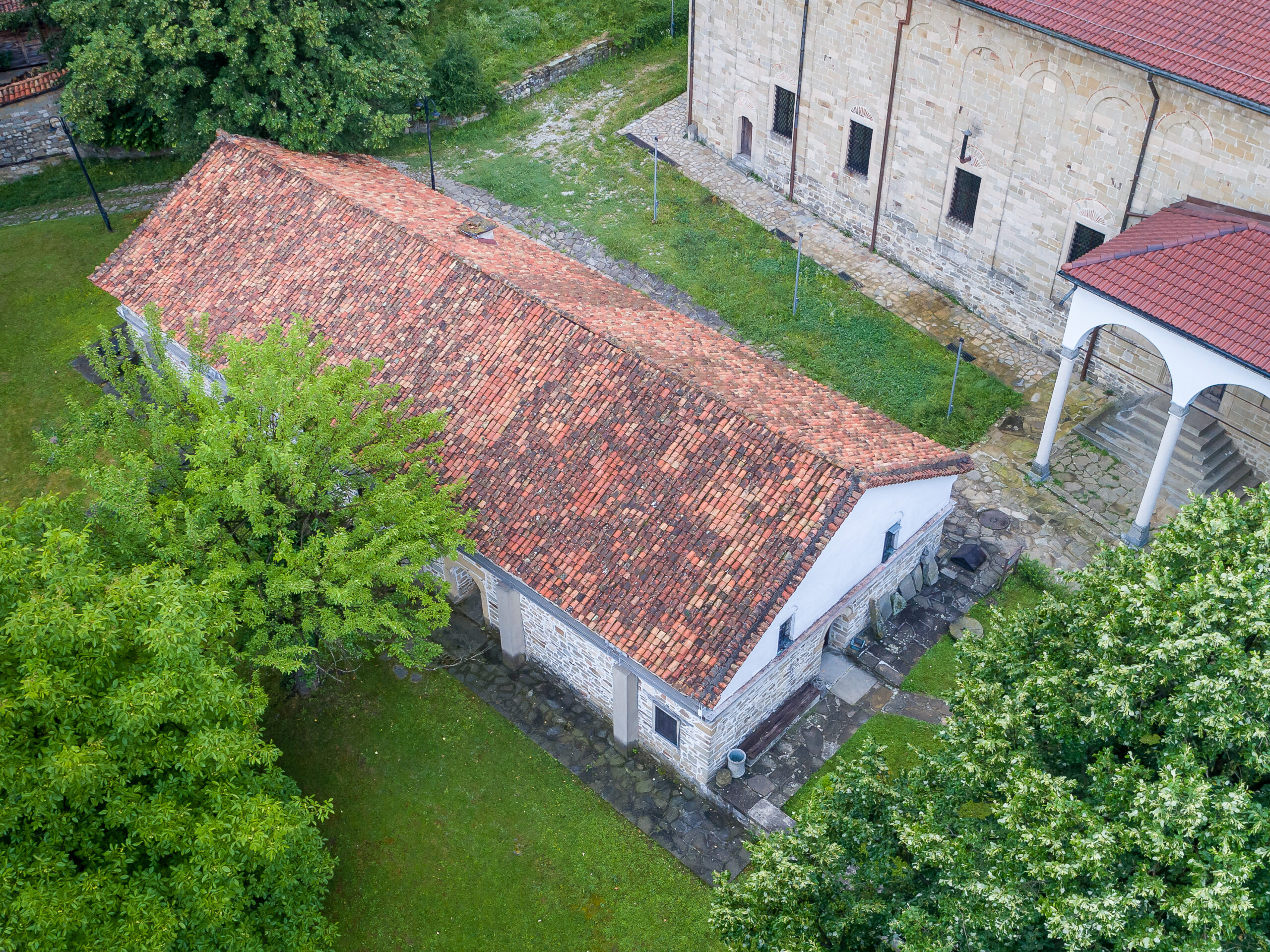 In the early 70s, Medgidia became famous for organizing a symposium on ceramics.
The exhibits are decorative ceramic figures, located among the park vegetation, it is a unique outdoor museum collection, one of a kind in Europe. 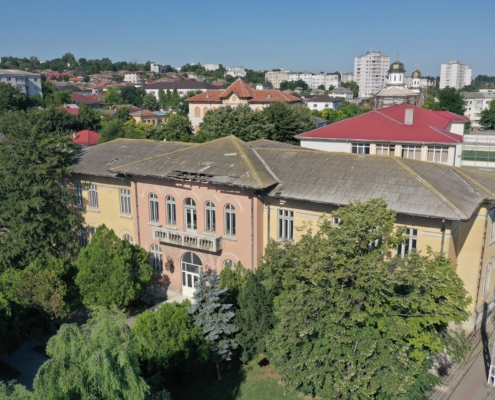 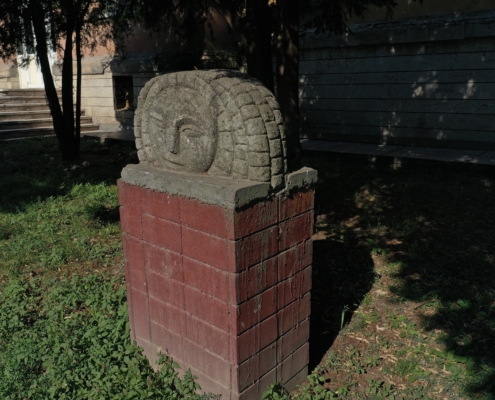 The Mosque Abdulmejid „The Big Mosque”

Abdulmejiid mosque, also called the big mosque, is a historical and religious monument built between 1859 and 1865. It was built in honor of sultan Abdulmejid, who ruled in the period 1839-1861.

The building is in unison with the traditional form of Muslim mosques, the interior is with oriental ornaments and inscriptions in Arabic. It also has a museum collection. The minaret is 25 m in height. The furniture is made of cedar wood from the Lebanese mountains. The emblems on the top, at the altar, and on the minaret were made in Istanbul and were transferred to Medgidia. 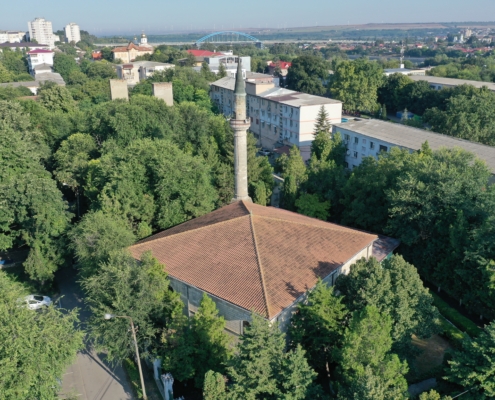 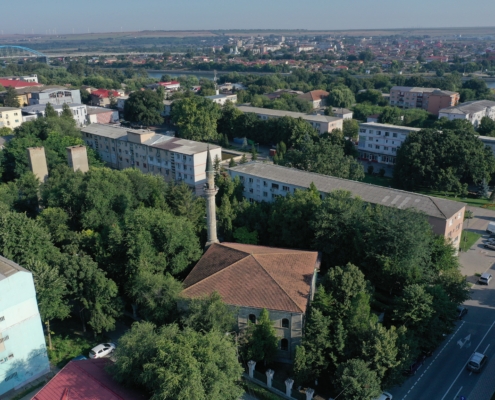 Church of Saints Peter and Paul

The church was built in the period 1890-1899. Outside the church is distinguished with its three towers, two smaller ones and a bigger one. The interior features a specially carved walnut altar, eight corinthian–style columns, which are as high as the royal gates, and eight other columns in the same style above them; large framed icons interposed between the first columns and adorned with impressive flower garlands. The royal gates are also made of walnut wood. There are two statues (royal and bishop’s). The dome and the walls are masterfully painted. 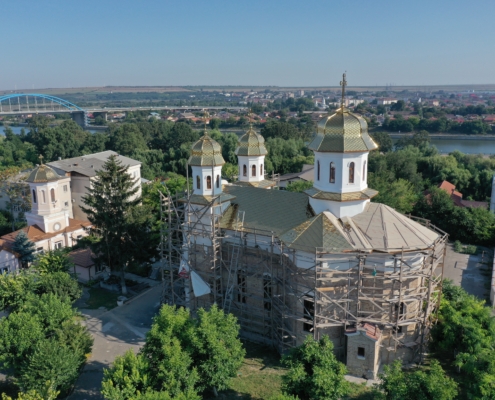 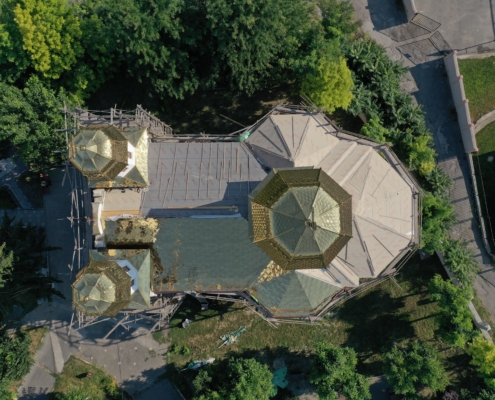 The mausoleum of Serbian, Croatian and Slovenian heroes

The pyramid mausoleum was built in 1926 by the kingdom of Yugoslavia to preserve the remains of 224 Serbian, Croatian and Slovenian soldiers, killed during the first world war on the territory of Dobrudzha. 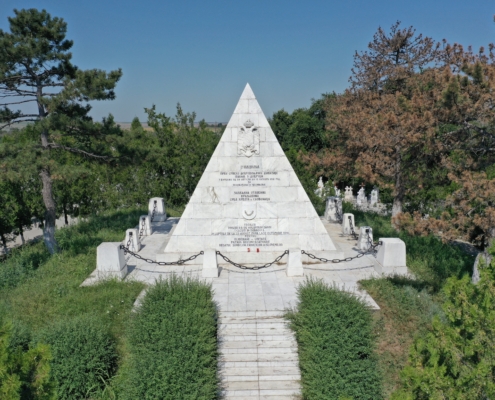 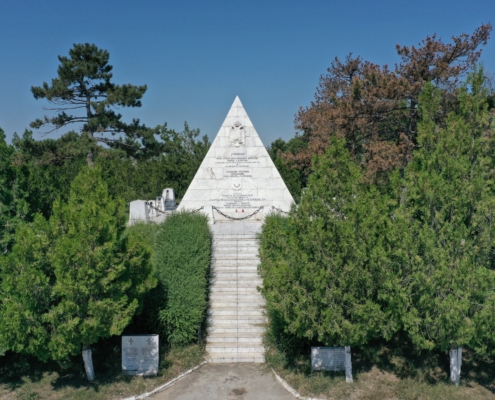 One of the most famous vineyards in Romania is located in the center of the Dobrudzha plateau and it enjoys favorable weather, which allows the growing of distinctive natural and sweet wines. They are certified by professionals and sommeliers and win medals from international competitions. 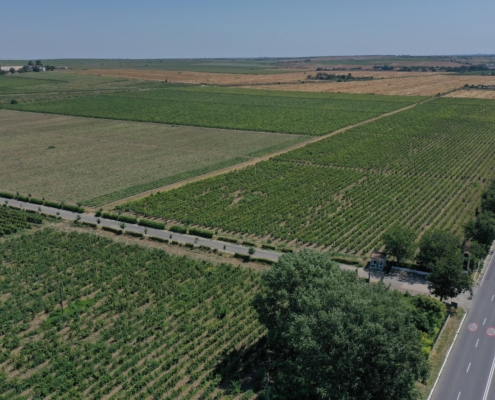 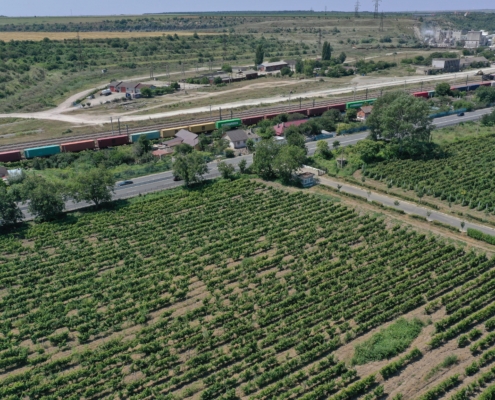 It is implemented by Elena Municipality in partnership with Medgidia Municipality, Constanta county, Romania.

Project „Culture in Eternity“ is cofinanced by the European Union through European Regional Development Fund under the Interreg V-A Romania – Bulgaria Programme.

The Culture in Eternity project is directly linked to the principles of sustainable development and actively promotes equal opportunities, non-discrimination and gender equality.